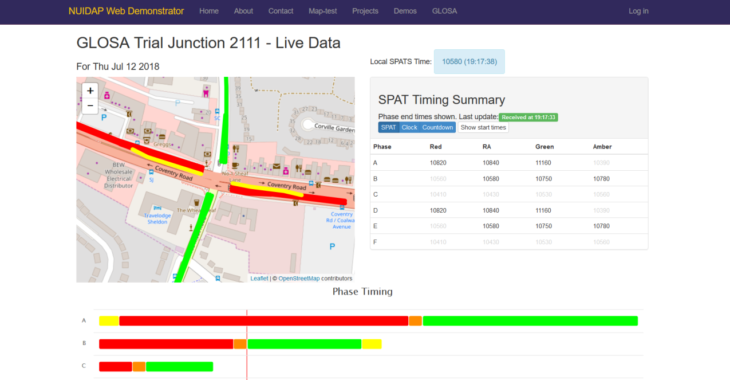 Birmingham City Council redesigned their approach to intelligent mobility through the release of open data sets for traffic sensors using OpenStreetMap for speed, cost and open-ness. The publication of traffic loop detector locations by the OpenStreetMap community made this data available to all, reducing duplication of data gathering and aiding early prediction of faults.

The City Council, like many local authorities, operates a UTMC system to manage the data captured from loop detectors in the road; car park sensors, and ANPR cameras, but the data is typically only seen by the traffic control teams.

The first task by the OpenStreetMap community was to create a tagging schema for UTMC sensors. Entering them as nodes on ways was not sufficient: lane numbers were required on complex junctions as sensors often monitor lanes separately. The next requirement was all the stop lines on highways where a traffic queue might start, so all traffic light locations were needed (not just a single node on the junction) and also all Give Way and Stop lines. For a city the size of Birmingham that was some task, performed over a couple of weeks by City Council staff, contractors and an OSM volunteer (contracted to the City Council).

Data quality remains a significant issue. The dataset is not complete (there are traffic sensors still to find) and sensors go on and off all the time.

Since November 2016, Birmingham City Council has been sharing data to visualise and explore predictive traffic modelling with local innovation projects

The results are encouraging, with benefits to multiple parties:

Data is also being utilised in follow-up projects including Greenwave and Green Light Optimized Speed Advisory (GLOSA) systems which provide ideal target speed recommendations to drivers when approaching a traffic light to lower CO2 emissions (and fuel consumption) and to reduce the number of unnecessary stops.