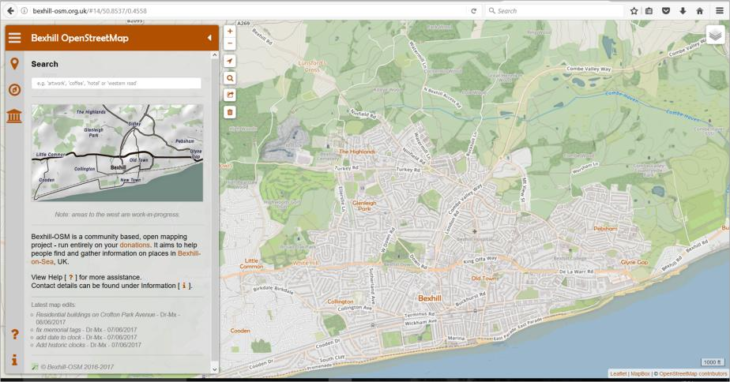 Bexhill is a rather traditional British town – it has a lot of independent businesses and a wealth of history. Local mapper Alexis Markwick wanted to herald this with an open, community map linking these things, and one that would get locals and tourists alike to explore the town in a highly detailed manner.

“The project began early 2016 after I returned from a cycling tour across Europe. When I was planning the trip I needed a mobile offline map and I found OpenStreetMap best fitted my needs. After the tour, I started to add some missing places on OSM, and from there I realised the potential of creating a complete map of Bexhill-on-Sea.”

David Hatherell, museum volunteer “Bexhill OSM provides an excellent multi-part reference to the facilities and features of Bexhill on Sea. I have found it a very useful tool for answering queries from members of the public and also referring enquirers directly to it for their own use. Whenever it has been recommended the feedback is entirely positive and enthusiastic. In addition I have had the pleasure in collaborating in providing information for the historical layers: a process which I found easy and pleasurable.”

Developing the map came in three parts – the collecting of the data by survey, freedom of information requests, government open-data, and talking to historians; using JOSM to apply the data; and finally website development to show OSM data in an accessible form.

“I’m the only regular mapper in the town: I’m working to change that. I regularly collaborate with bexhillonline.net, to get new businesses on the map.”

Alexis also collaborated with the Bexhill Local History Group who freely supplied their data on postboxes and their royal cyphers, street history information, historical objects and artwork. He was also able to use East Sussex County Council’s Rights of Way dataset for many of the footpaths. Rother District Council had data on dog bins, public car-parks, allotments, recycling centres, toilets and parks found in the open data sections of their websites.

“I did try to approach these authorities directly to get their feedback, but other than adding me on Twitter, I’ve yet to hear anything!”

“Recoding much of this using Leaflet and its plugins really allowed me to expand the website to what you see today. The most challenging part is designing an interface that is functional and easy to understand on both desktop and mobile devices. I’ve spent some time watching others use the website, and as a result tweaked the interface and simplified it as much as possible. I still think there is room for improvement, development is still in progress.”

Bexhill-OSM’s core relies on many APIs (OpenStreetMap, Overpass, Mapbox): if any of these systems fail, a part of the site will cease to function correctly. It took Alexis around two months before he was happy enough to release the first version of the website. However he thinks it may be better to do this differently in the future, perhaps hosting his own server that delivers OSM data.

Feedback so far has been overwhelmingly positive, mostly gained though posting on social networking groups and visiting shops with business cards. The reality of having a free map, that can be instantly updated to show the continuous changing landscape of the area has great local appeal.

Bexhill-OSM has raised local interest in OpenStreetMap. The two biggest parks in the area have approached Alexis on how use OpenStreetMap data on their official notice boards and websites, and local people are encouraging others to use Maps.ME. Alexis is still innovating and is exploring the idea of creating tourist information maps for the town, and developing more documentation that will get more people updating what is essentially their own map.

Recently Alexis has been working with the local study group and Bexhill Museum to document many of the historical places, and they have just finished building a World War 2 bomb map. 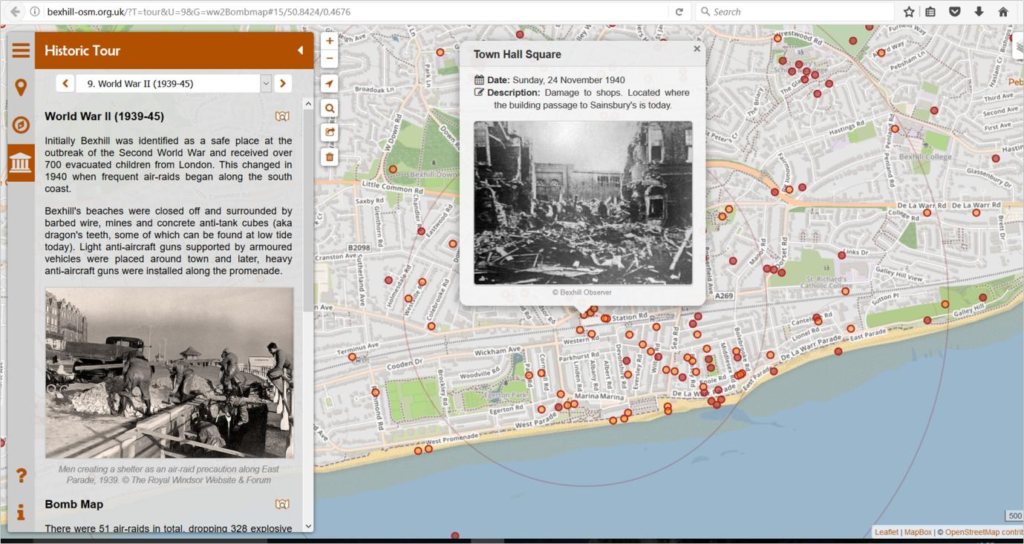