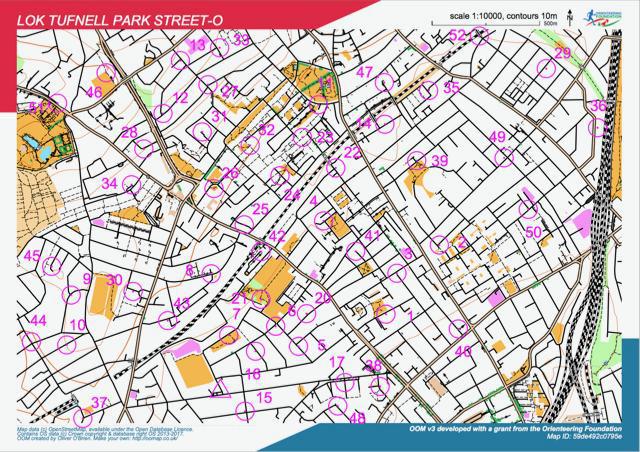 Because the maps are based on the “Tile Mapping Service/XYZ” standard, they are viewable only at fixed scales. The most relevant scales for orienteering are 1:7000 and 1:14000 . When you produce a PDF map from OOMap, it will be at the scale you choose (e.g. 1:10000). The maps make loose use of the ISOM and ISSOM orienteering mapping specifications, particularly the colours and the styling.

“This is really beautiful, not to mention great. In my classification it’s one of the very best examples of innovative use of OpenStreetMap data / how OpenGeoData allows just about anything one wants to do with it.”
— Jaako H from an OpenOrienteeringMap blog comment

The idea of “Street-O” is that you have to visit as many points, marked on a printed map that you run with, as possible within one hour, and get back to the start. The route you take is up to you, so it’s vital that your map doesn’t get you lost. Making maps for Street-O events was slow, error-prone and needed expensive software. So Oliver O’Brien (who edits OpenStreetMap as “Ollie”), a researcher and software developer at the Department of Geography at UCL, created OpenOrienteeringMap. Ollie offers it as giftware, believing gifts will encourage further development and offset the costs of hosting the site.

OpenOrienteeringMap makes it as easy as possible for volunteer Street-O organisers to create maps for their events. This has two main benefits. Firstly, with less time spent on drawing the map, and no cartography skills needed, the website generates a PDF map to print at the click of a button. This enables more new people can get involved and organise their own event, taking time to plan great courses rather than draw a map. Secondly, it encourages new people into the OpenStreetMap community. The only easy way for organisers to update the roads, paths and other features on the Street-O map is via OpenStreetMap – with a daily (8am) refresh of the database back to OpenOrienteeringMap for the UK (less frequently elsewhere) – so the website has got a few people hooked on being “regular” OpenStreetMap editors, as well as orienteers.

Unique needs of a map designed for orienteering:

Orienteering maps need to be highly detailed, clear and accurate, as competitors run fast through unfamiliar terrain the accuracy of navigation is as important as speed. This also applies to Street-O events: it is important that all navigable roads, tracks and paths are included and that the map is uncluttered. OpenStreetMap has a good record in this regard, being a grassroots community. The data isn’t perfect. Sometimes missing detail is spotted by the organiser and they edit OpenStreetMap to fix it. Occasionally it isn’t spotted and competitors report back missing paths at the race finish – edits can then be made which will benefit future races. These processes improve OpenStreetMap (for everyone) while also improving OpenOrienteeringMap (for racers).

You can automatically import the locations and details of public plaques as suggested controls, into the area where you are creating a map using the API from Open Plaques, which is a global open-source database of public plaques. The functionality is similar to importing postboxes, another popular control type for informal Street-O events.